In Singapore, there’s this TV station channel called Channel 5. Just like America have Fox channel they even have tagline like ‘So FOX! Always Unexpected.’ For Channel 5, if I’m not mistaken every Tuesday’s tagline will be ‘Your must see Tuesday’.

Because I’m not a TV station, taglines like this don’t come by often. But not this week my friends!! Not this week. When IndieBindi bakes, I is one happy Indian girl!!

Since I came from a CCA full of drama, today’s episode of fetching the cupcakes were no less dramatic.

Collection for the cakes were from 8-10pm. I was suppose to collect it with my cousin – cause we’re sharing the cupcakes. One fat (for) all, all fat (for) one. Sharing is caring right?

Anyway, the route from home to work passes by her crib. So I asked if t’was ok for me to drop by 6ish. Little did I forget, I actually have job interview at the town today, which in no way is near to her place, which means its not, office, sidetrack, and get on track back home. But since she said ok, I rather take the bus which passes by my house *wails with portfolio and files* and slog myself to get the cupcakes compare to going home to rest for 90 mins max, then, painstakingly head out again. Clearly my motivation is not exactly in the right direction, but that’s fine (I suppose, haha).

When I reached, she was surprised to see me, I was more than surprised that she’s surprised. It’s like intruder alert! Intruder alert! But, kind woman is kind, she let me in, bring her household pet  cat out that was happily looking at birds (gahh… Why can’t i just be a cat?!?!!!) for me to disturb and play with. Today, I saw two sides of Sparts – manja and aloof.

See how Cleopatra ish he is. (I know, sorry Sparts. I just had to compare you with Cleopatra). His manja side? Not on the camera cause he was busy biting me. Should’ve gave him my back, for him to bite and scratch instead, bahahahaha.

Since I came earlier, she did my cake first. While doing my cake, I can’t stop telling her my woes eating other salted caramel. Tried rave reviews from people and end up disappointed, but once again, Not this time baby!!! Hahahaha… From now on, ain’t goin anywhere else for this.

It was related by al-Bukhaaree and Muslim.

I believe. I love my cousin, so I popped by her place (went alone without telling my cousin, btw) to pass the cakes, cause I must have her havvit! Called her and told her that my maid was on her way to send by some parcel – which she believe, cause woman’s a businesswoman – pats brain.

She was so touched. So touched, that she got out of her bed, for and from nap, still in make up no less, to greet me. I forgive the smudged eyeliner and oxidized powder by the way.

So that’s the first threat. Haha. Sorry for grandma length story (just for the first part). 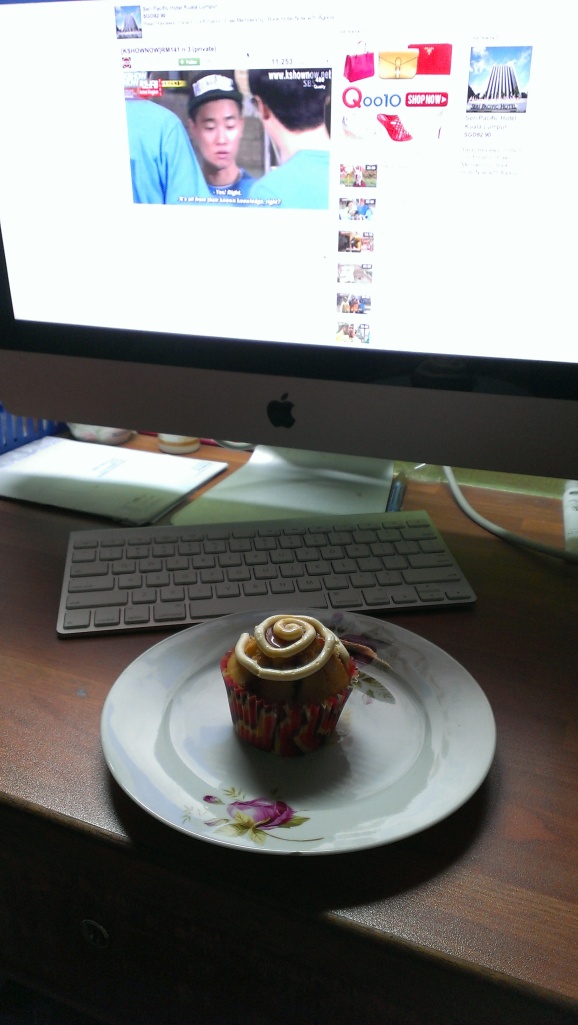 Threat 3: This was a real life threat. Had an interview in a small white room (job interview cannot suka-suka instagram with interviewer right, so no photos) with a charismatic guy – which I truly belief is an architect –  who tried to make me doubt myself – which I almost did by the way, doubt myself. But thanks to my narcissists brain that went, “Why are you succumbing to him? You’re fierce” I went diva all inside and made it out alive. Hahaha… No, I didn’t go all diva on the interviewer la… My 4Dness has not reach that level yet.

Phewww…. Interview. Cupcakes. Running Man. Too much for me to handle in one day. I’ll try not to do this again.

P.s: Do you know the Canadian joke?

PPS: Sorry Indriana for popping in earlier, haha… Really felt like shooting myself with your piping bag just now.

*Stuff 1 cupcake in the mouth*