Ahhh…. Finally the day has come for me to meet my kipas-es (fans). 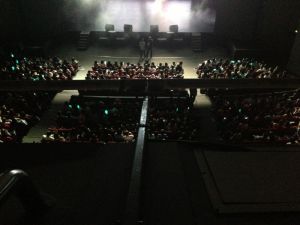 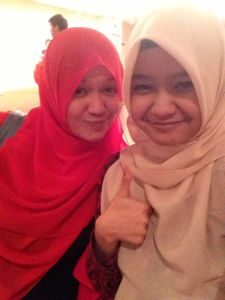 With my ever semangat cousin, Nasyirah. Coincidentally in red. 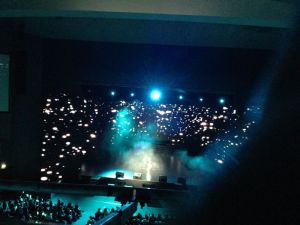 And so I change clothes to perform for my party people…. 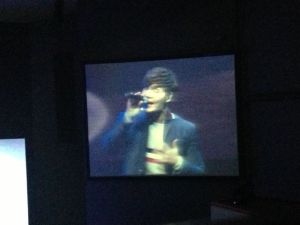 At first I was all chill, my back against the seat and when people cheered and screamed their hearts out, I was still relax y’all.. My ever hyper cousin by my side nudged me and went, “Oi.. Have some fun la!” Sigh… such an uptight person I am. I must admit… I have such a sucker behavior for concerts or events like this. I’ll usually be all robot about it. But, I thought it’d be nice to loosen a bit and feel like how others are feeling.

So I leaned forward clap ma hands, join the crowd cheer, sing a long though my voice is no different then rooster cuckoo-ing. It felt goooood!! So So goood…. Nobody’s gonna judge you anyway since it was dark and everybody was looking forward to the same thing.

I must say that he was very shy. Shy-er then me hokay… Not that I’m tatau malu punya orang. He kept touching his hair, neck, shirt and belt. As if the belt and pants are not on good terms that they’ll split away from each other. I bet if he was sitting on the floor he would have untie and redo his uber nice and shiny silver sneakers!

Aside from the live performance which I absolutely enjoy minus one song cause the MR was too loud I couldn’t hear him live, alliswell and there were games too….

There were few games like Chicken fight or this time, Flamingo Fight… 2 against 1. The 1 is him of course. Its like jabbing your knee against cushioned wall I wager! Second game was tug of war and after that I can’t remember what. But there was this particular game where 3 contestant were invited to the stage to sing 1 out of 3 songs which were  Men Are All Like That (남자가 다 그렇지 뭐), 사랑스러워 (Loveable) and One Man (한 남자).

The three contestants were One adult male. One adult female aaannddd, a Six Years Old TODDLER. The mom brought him to the stage stairs and Sparta picked him up. He sang an example of all the song parts and the first contestant up was Yi Fung, the six year old hunneh. The kind MC knelt, held the mic for him and Sparta Kooks was by his side giving him the cue at which part of the music he could start singing. We could hear nothing. Duh. So, the brave boy did it without music. BRAVE BOY! If I were there without background music, heck, without minus one, koyak rabak suara aku…tak adalah merdu mana (not melodious) to begin with…

And you hear Yi Fung went….

Men are all like that, I wouldn’t be any different

The momma must’ve been a big fan but the lyrics for a six year old like err….RESPECT FOR YOU AH!! Music knows no age and boundary right?

The contestant with the loudest cheer wins. I think it’s no brainer ere’ who wins. 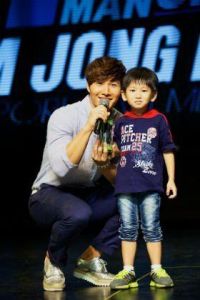 Yi Fung y’all… When he got the prize he just stood there motionless, expressionless innocently even when Sparta was by his side. Relax y’alll I’m just with Sparta Kooks. Whazze big deal??

After the games, he sang for us other songs and I tried to snap photos from my phone cam despite no photography allowed and security guards less then 10m away from me….

And thennnn…. jeng jeng jeng…. A bright light went out of my phone. Blardy flash!!! OMG…. Why?! Why?! Why?! You were always off… How did you get there? SO I came to realise that my feng shui for this kind of thing is really bad… So, my cousin was my savior that night…. Lucky no security guards drag me out…. 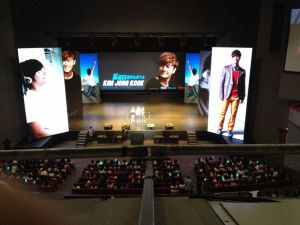 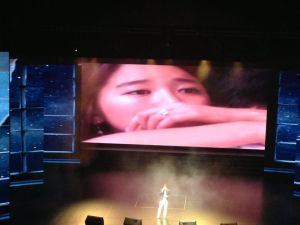 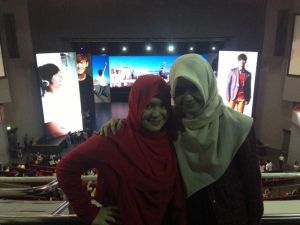 I must say he spoke english 90% of the time without needing his shadow like translator. He only got the translator to speak to us at the end while he spoke to us in Korean…. (in case he secretly disappoint some fans for not letting em hear him speak Korean live) takot ade fan balik sedih tak dengar die cakap Korean live kan. His English was bearable and hearable…. Confirm babble english nonstop in flight right! Hahaha… K ah…. Takmau buat dosa!

And a big fat Thank You to Nasyirah for nudging me to go! Loosen me up and let me enjoy a fat ball of time….

Here’s to many more events!