After the last day of our ‘camp ukhuwwah’ 4 of us had Ar-Raudhah paintball tournament. We had no idea that the day would coincide with the last day of our camp. Like….seriously…. Who would purposeful do that right? Everyone is expected to be shagged at the end of every camp… But, nonetheless, there we were, putting our lives at risks. Cheyy….like real only uh… There we were, representing Fatayat MKS….

There were 3 groups of ladies….and the rest were…well… Pfft… Boys. Haha…I thought it would be an all-ladies tournament. Wishful thinking there, Aqilah. Wishful. But no…

Before our first ever game, which was… Like… More than half an hour after it officially starts, we had lunch. And oh goddd….. I had a nervous/mental breakdown. All jittery. Blaming the adrenaline here. I could feel the adrenaline pumping. The anxiety… It got worst when my stomach starts to twist and turn … I felt like puking…. Oh gawdd, I can pheel it now…

Yeah buddy, I.managed to sick it up… Hahaha..

Our first match was a little dramatic.

We went to the toilet to ‘keep calm’ ourselves. Not realising that its our turn… On our way to the, what I would call “battlefield”, we received a call and ran with our might there. There, we were told that if we were later than 2 minutes, we would be disqualified for the first round….

So, the first match, I got killed first… Yupp… I see what you just did… No surprises there.. hahaha….

Oh, just to burst your bubble, we lost all game…. Haha…

It was interesting to see other team play. Some came in all their sponge wear… Their own mask and stuff. Honestly, we were intimidated. One of us just went, ‘Aqilah, if I panic, please shoot me’ hahaha.. thank god, we didn’t have to resort to such measures.  With a maximum of 4 heads per group, some of them signed up as few groups. While the other group is in the battlefield, the ones outside would direct them.

Our last game… Was our worst nightmare coming true. Our opponent was one of le big boys… All suit up in their padded wear and mask. Making me go, pfft, ‘paintball where got fun if no pain’ take a straw, suck it up and be a man, taking the bullet pellet. But of course, thats the devil in me la. The angel in me went, ‘Sighh…they’re so lucky to have time to have paintball as their hobby’… Have all those suits and stuff.

When we passed by them to get to our area, they said, ‘good luck, all the best. We’ll shoot slowly’ *meeeeppp* pause there…. How in the world do you shoot people slowly??!! So I said, “how are you going to shoot is slowly when once you pull the trigger, the pellet will fly not according to your command?” Imagine this, *le me talking to bullet pellet*‘dear, travel slowly k’ it doesn’t make sense right? Hahaha….

Because they were our opponent, we had to change our ‘self-victory requirement’. We know the probability of winning is 0. The ‘requirement’ was … Last for 1 minute… Aaaannnnndddd, we did… Hahaha… 1min and xx secs *pats shoulder* that was victory man… Haha… In the end, we grabbed our bags, to go home cause we were juuussssttt, exhausted….

When we first arrived. Alllll ready to lose. Our first group photo.

Preparing to enter the ‘battlefield.’ We’re girls for a reason by the way…. We’re good at multi-tasking… :b

The group of ‘spectators’.

Losing our sanity for a moment.

Apparently the 3rd group we had matched with were a group of Karl Lagerfeld prodigy… They weren’t happy with my Dian Pelangi tie-dye shawl… Soo, they added more dyes. Thanksss kawansss….

Relieving our anxiety with our smartphones. Sighhh… 21st century…

Once again, in search for our sanity, in the ladies…. *flips hair* 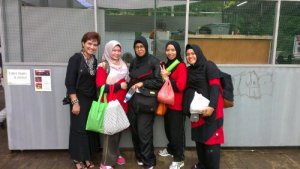 Last group photo with the kind lady who helped us even to the extent of wiping our painted mask… Thank you!!!

A day filled with so much emotion…. Was that day. I would comeback again, most definitely, but for a friendly match with my cousins or friends….

For now, I have other places to break a leg at….