Day 2, was such a busy day… Oh my god…. We woke up at 4 to bathe and get ready so that the participants can wake up at 5… In the morning of course. So, after prayers and morning dzikir, they went up for morning exercise while some of the facis collect breakfast and prepare them. One of their activity was Mosque Hopping. Muz and I was stationed at Masjid Abdul Razak. We left wayyy early, without breakfast…. Haha… We weren’t thaaat hungry anyway. Breakfast was rice. I’ll be busy in the toilet if I were to eat rice at 6.30 am. *teehee* 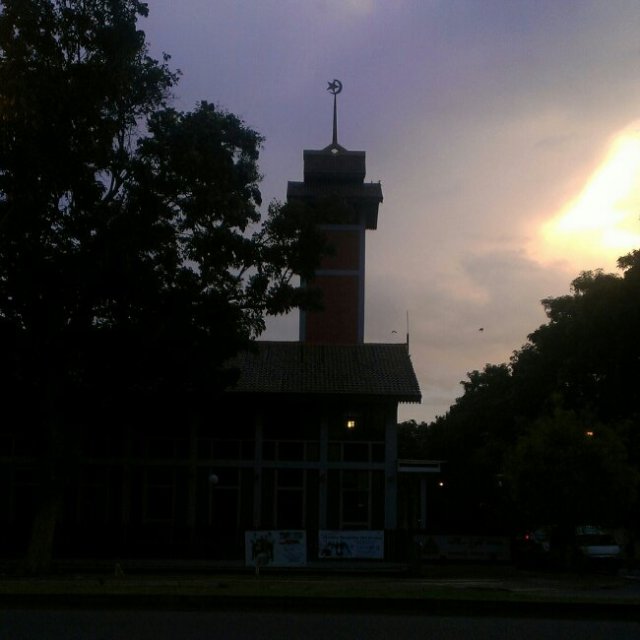 The morning sky as we left. Subhanallah. 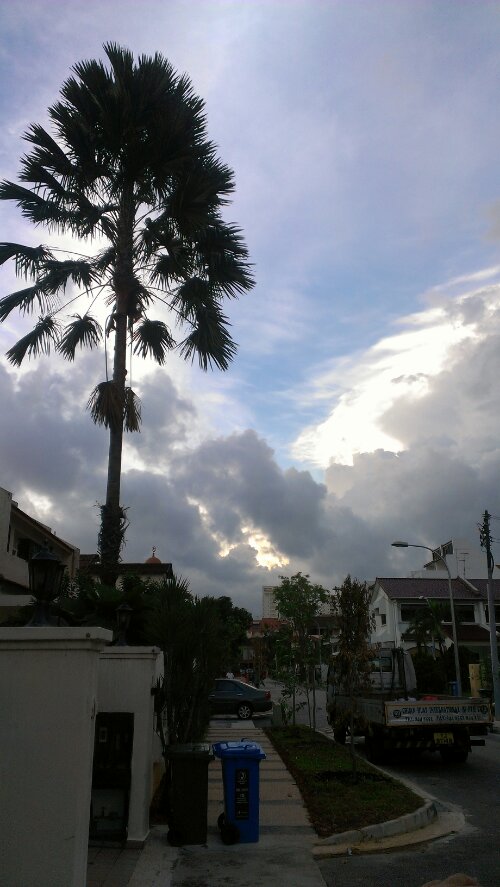 The sky as we were walking to the mosque. Seriously, my obsession for sky never ends.

We reached there about an hour earlier then the kids plus the preparations wasn’t much. Just hold on to our hoolahoops and cards. So, instead of tahiyattul masjid which means that every time you enter a mosque, you should offer 2 rakaat prayers before you sit, we qadak our sleep (we slept. It’s like a payback. We didn’t have enough sleep.) *major facepalm there* there was NOOOOO body in the mosque. We pulled the curtain, switched on the fan, off the lights and let our soul wander for an hour.

We woke up with a jolt… Like stationed ninjas sensing some intruders. Haha. We hear their footsteps and voice but since the curtain that separates us kinda flushes in with the wall, they took some time to find us. Haha. We? Didn’t bother calling them to our hideout. 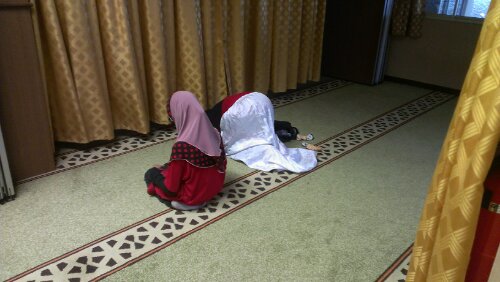 Even the participants offered tahiyattul masjid. 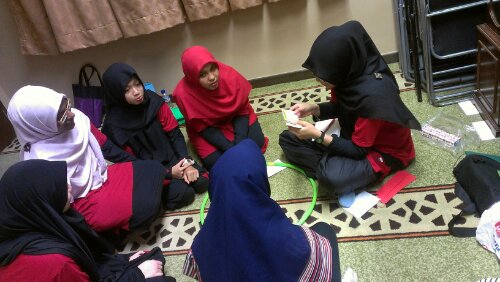 The participants having their Quran Challenge.. 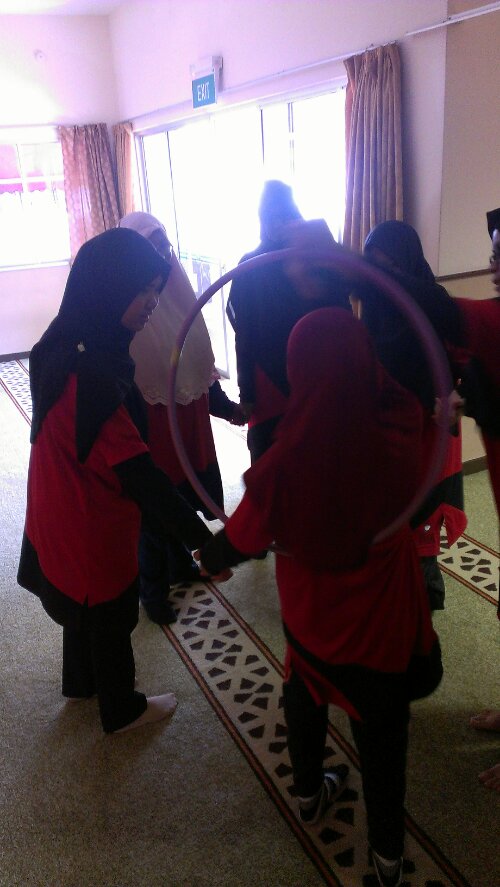 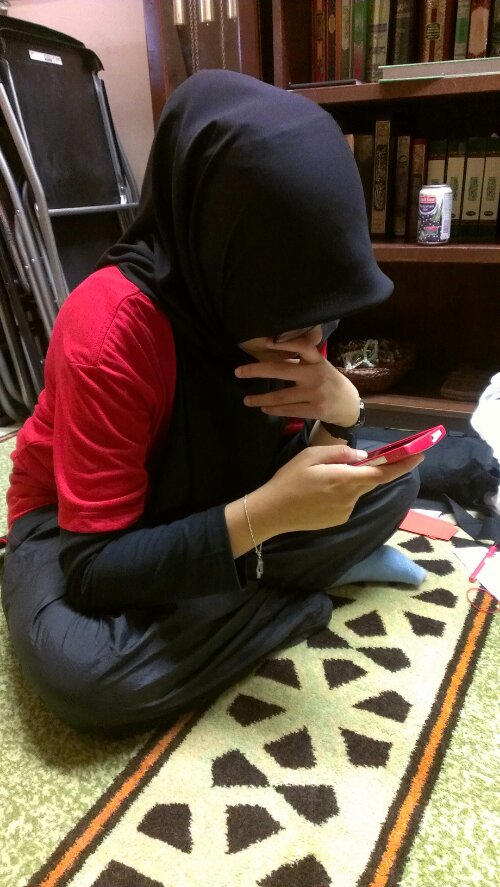 When the kids left, we were back to stoning… 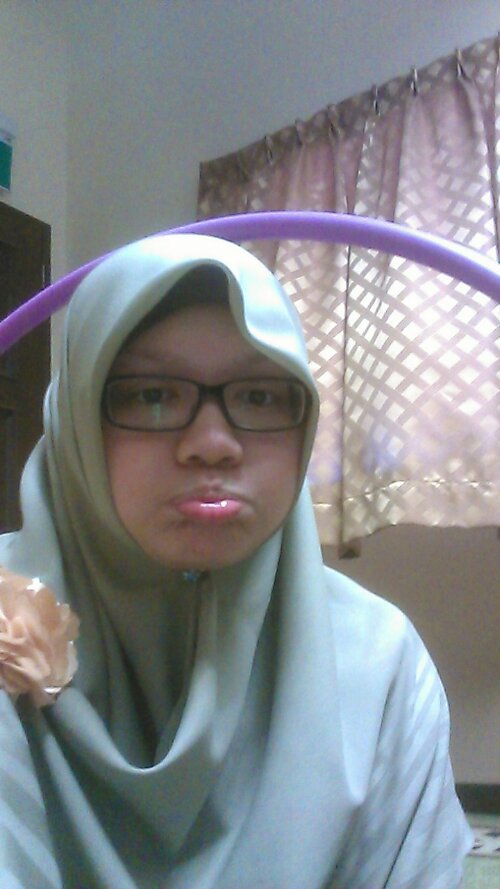 Told ya… Seriously, the whole morning I look like I just woke up. 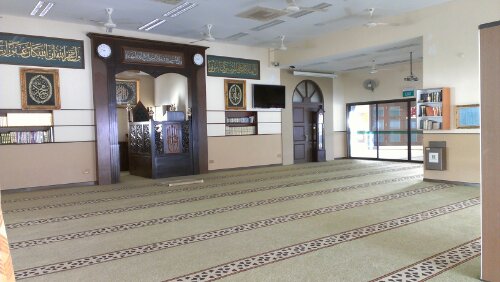 Masjid Abdul Razak. Small and simple…. I like! Haha

While we were in the bus, both of us slept, headbanged each other and almost missed our stop. Back in Fatayat room, our room, we crashed there with another 2 station master there who don’t have to leave the mosque…. Pfft… Jealous muchhh.. haha… Originally, we were suppose to comeback early so that we can rehearse our script for the nights skit… Food overtook us, as usual.

Afterwards, we had water games. There was a lot of hoo haas in setting the station. 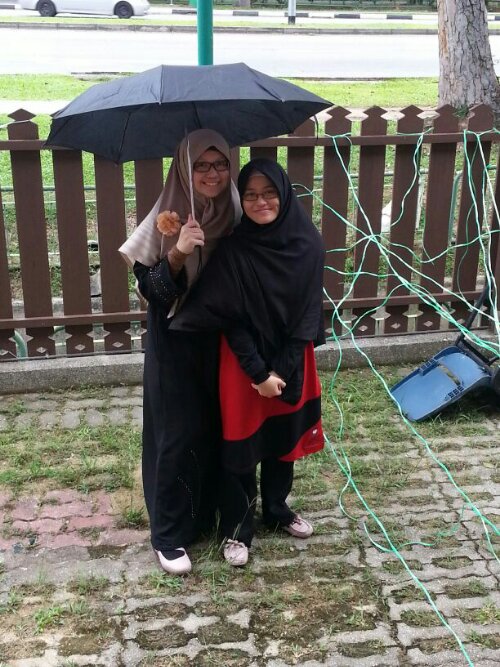 Drama 1: There were lots of pigeons. Like….reallly alottt… Ok fine, not as much as the ones I saw at Italy… But, these pigeons here…. They poop…as they fly. We were like ninjas trying to get to the web. Everytime the flock of birds flew above us, we would run and scatter… And scream of course. No pretending of being demure here. Haha. I gave up running and used my brains. Umbrella to the rescue!!! :B 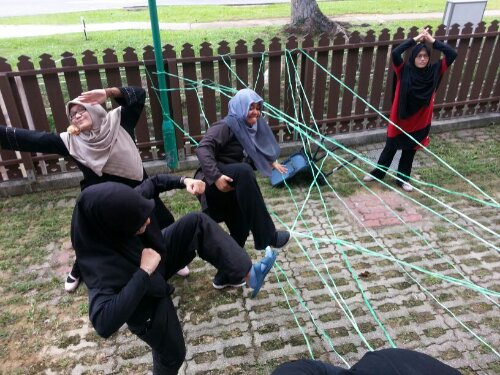 Drama 2: Mental breakdown while setting up the web. Hahahaha…..we were trying to make the web as complicated as possible. I guess, we got stuck and stressed at the same time.

Drama 3: Tying of water bombs. Dragging the pail. People went missing cause they tie them at some secluded place. Haha. It was seriously a day of ‘where were you?’ Sometimes, we can’t find each other for hours…

Afterwards, it suddenly starts to pur heavily…. We put all activities to halt. Asked each other if we should continue and all those doubts. Safe to say, we played the wet games after the rain stops pouring. Haha… I shall not posts the picchasss cause some of them were wet and soaked. Heee…

At night, we were back to our tadabbur and tadarrus activity where we’ll sit in a circle. Read 1 verse of the Quran until its finish. Then we’ll go another round reading its translation. After which we’ll take 5mins or so to choose 1 verse which we can relate to and share it among the group. The surah for this camp is Al-Hujraat. 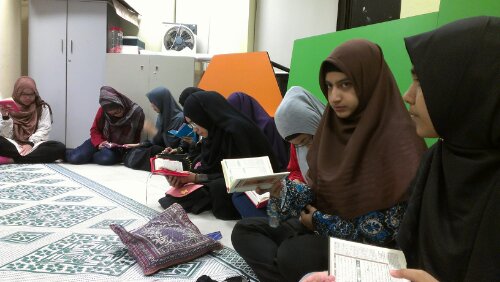 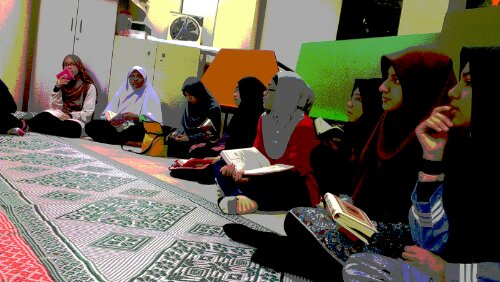 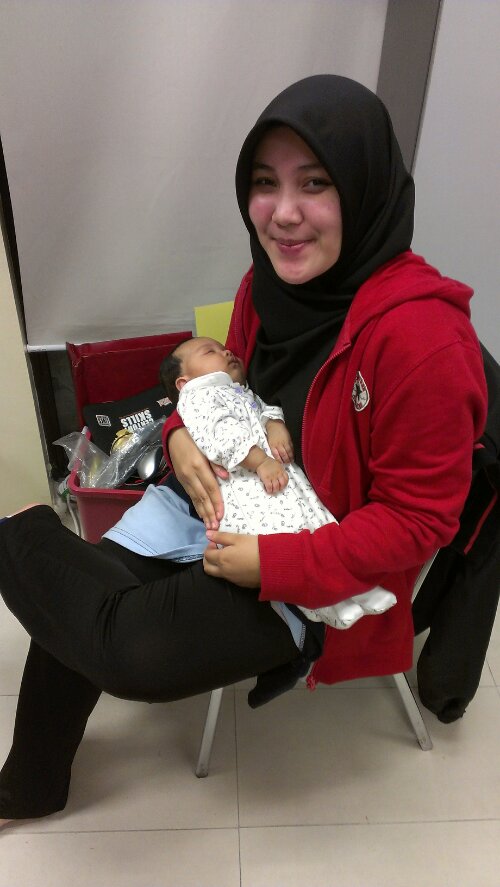 Busy with something else…. *rolls eyes* Hahahaha… 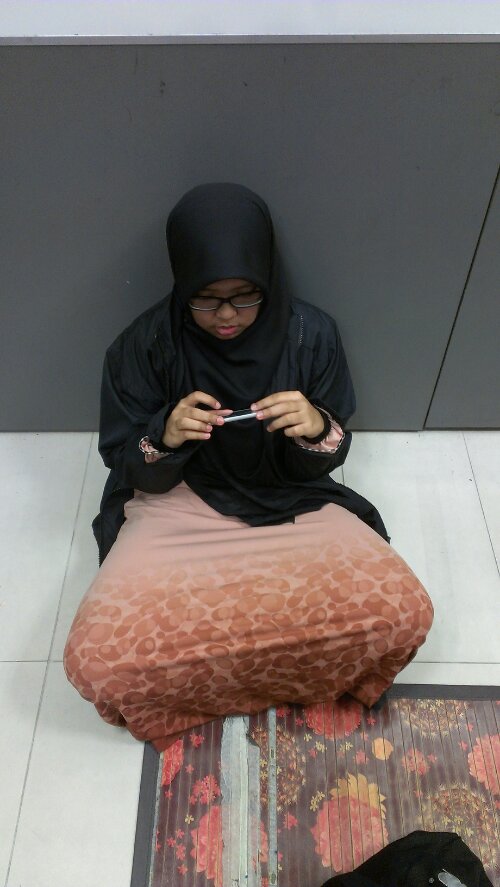 This faci…. Oh My God…. She kept being chased away by us, the helpers, cause she kept being stuck to us… Sometimes we’ll sit in a group and when we’re about to open our mouth about the game procedure and stuff, someone will point out that she’s there and… Err… She’s not suppose to be there. Hahaha… One sesat faci…. Always…. *its like, she’s the lost sheep*

I was simply amazed at this kids. Their heartfelt sharing. How they relate to their environment. How they felt about that particular verse was so matured. Its a surah about the hereafter, friendship, relationship and all other ships that can be found. Patience and virtue. Most of us teared …. Ok fine…. Cried like no tomorrow cause it just touches our heart. The words on the Quran, filled with truths, warnings and most definitely comfort, blankets and warm our hearts that night.

Afterwards was the skit… Since they were all tearing and in the sober mood, so was our skit….. You know how when you cry, like it or not, when you breathe or clear your nose… Sort of the snort type but not… Oh gosh, how do I explain this… Ok nevermind. The noise your nose make after you cry or have flu… Ahhh… That noise… While we were verbally acting, at the sad parts, we’ll use our nose to capture the kids back… Haha. *sniff*sniff*, the other facis just hold their laughter back at our actions. *phail*. The kids can’t see us cause we switch the lights off and told them to lie down. Heh…..

After which, we told them to hug their sister next to them and imagine what if their sister, is gone. Can’t no longer be with them through right and wrong… They were sobbbbbiiinnngggg.… Hehehe *wicked wink* 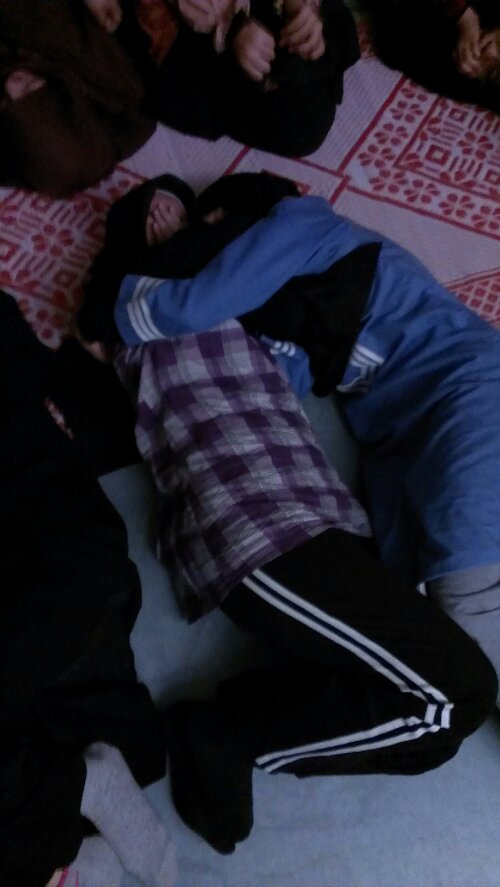 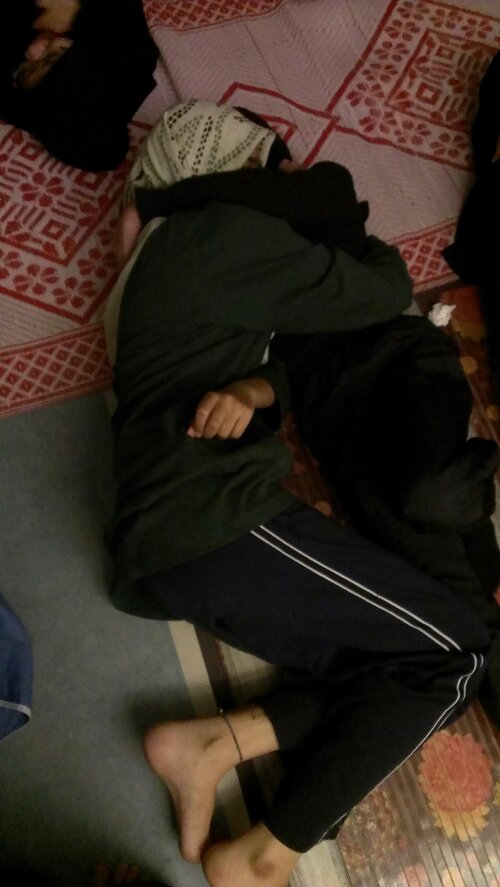 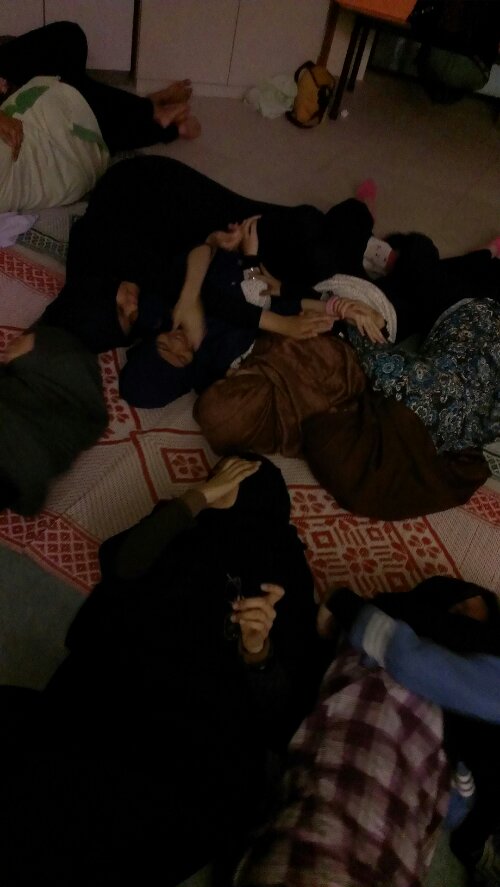 It was a stressful and successful activity… We were so stressed out if we could execute this activity as how we imagined it to be. Until, at the end, while we were in the organizing committee discussion, our mentor told us not to worry so much. If we thoroughly prepare for these kind of things, Him above will help us. So long our intention is right. We were probably too caught up that we forget that He is the best of planners. 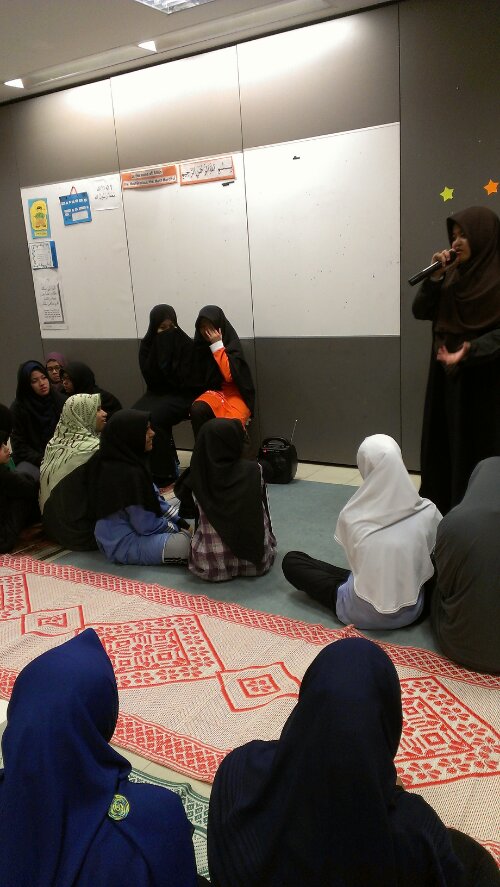 Our mini discussion with the kids… 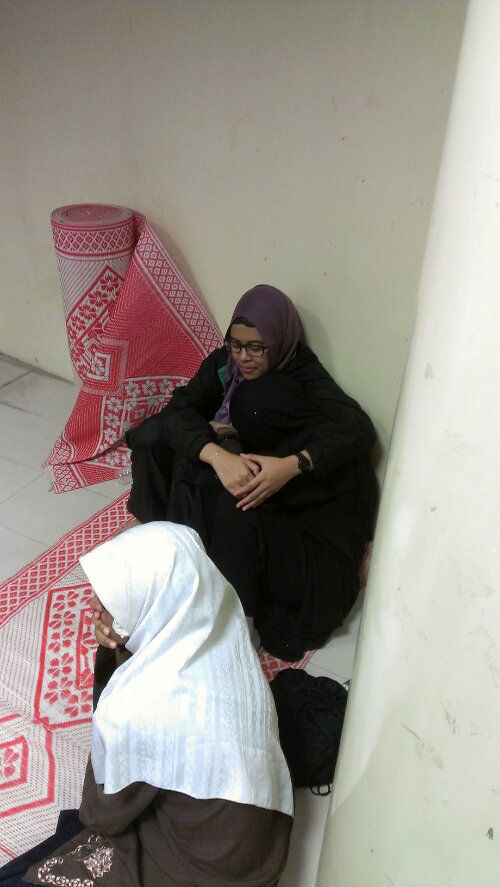 Even the helpers and facis seek comfort in each other. Oh, the power of sisterhood…

Safe to say, that night most of us slept with headache, red eyes and Rudolph nose.